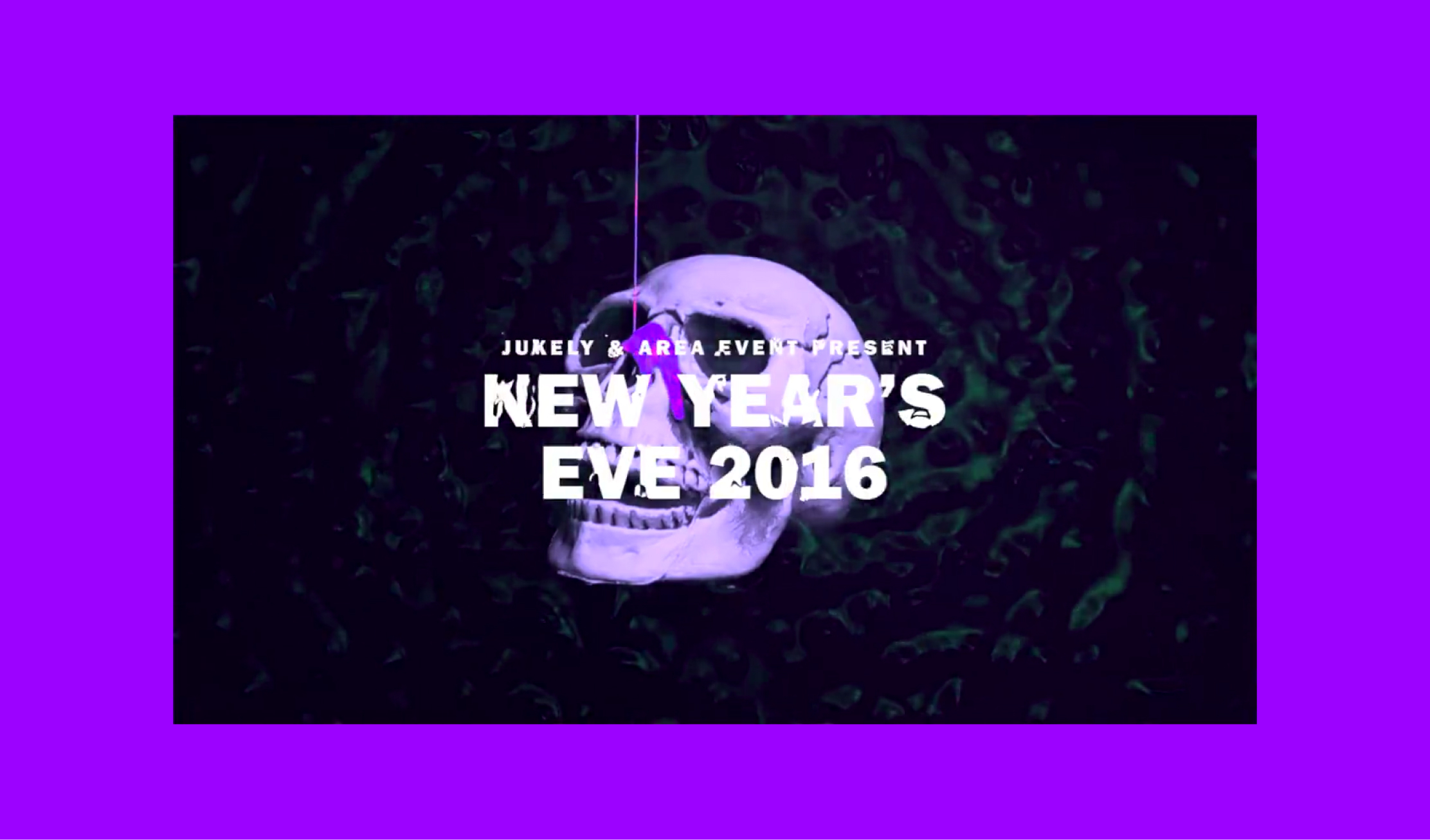 In the winter of 2015, Jukely was looking to host a big and splashy event for New Year’s Eve and give our customers and future customers a once-in-a-lifetime experience. The French electronic group Justice hadn’t played in New York City in a few years and Jukely was presented with the opportunity to buy exclusive rights to their New York return. In addition to Justice, we would also have Bob Moses, Gesaffelstein, and With You. Our members would get first dibs at tickets, and we hoped that everyone else buying tickets would learn about Jukely and associate it with this amazing event and see that a Jukely membership comes with special benefits.

There were also a few obstacles. We had zero budget to produce creative assets, because most of the budget went into booking the talent. We needed to get the creative live as soon as possible to compete with the other major nightlife events that would be happening on New Year’s; there were a few high profile shows that night and we needed to get the word out before people made plans. Also, due to artist contracts with other shows and festivals, we wouldn’t be able to announce all artists at the same time, but needed to start promoting the event before we were allowed to announce specific names. The design team was also just two of us, myself and the creative director.

The creative director and I brainstormed and decided to produce a video to announce the show. Facebook, at the time, was emphasizing video, and most electronic shows of this calliber used videos instead of posters to build hype.

The creative director and CEO gave me a loose ask: make it splashy and make it cool (and make it in a week). I had been thinking a lot about how Justice and Gesaffelstein’s music sounds metallic and wet at the same time, and I had imagined their music almost looking like what the liquid metal in Terminator 2 looks like. I had also been thinking a lot about the idea of pouring green paint onto objects and greenscreening out the paint as it dripped and applying different textures and videos and effects to the paint.

When I brought the idea to my creative director, he loved the concept and felt that it really matched the aesthetic of the nightlife scene and the artists. To match the sinisterness of the music, we decided that one of the objects should be a skull and the other should be a disco ball, since it was NYE. We felt that there would be something eerie about a disco ball with something dripping down it, which could have the vibe of a party gone wrong.

In addition to having no budget, we also didn’t have a permanent photo studio to produce any of these videos. Working with what we had, we commandeered the music production room (which was the size of a closet) of the music startup we shared office space with. We went to Party City and bought black foamcore and numerous props, and went to Home Depot to get the closest we could get to greenscreen paint. Since it wasn’t our space, we had to be super cautious to not make a mess, so we had to build an elaborate moat to catch the paint out of cardboard boxes. We used black foamcore boards to try and block out the background as much as we could so the green would pop and give us less to cut out post-production. We adjusted the lighting and backdrops to make everything so dark that the objects looked like they were floating, so we didn’t need to suspend anything from the air. This also gave the objects an uncanny CGI aesthetic that really matched the genre. 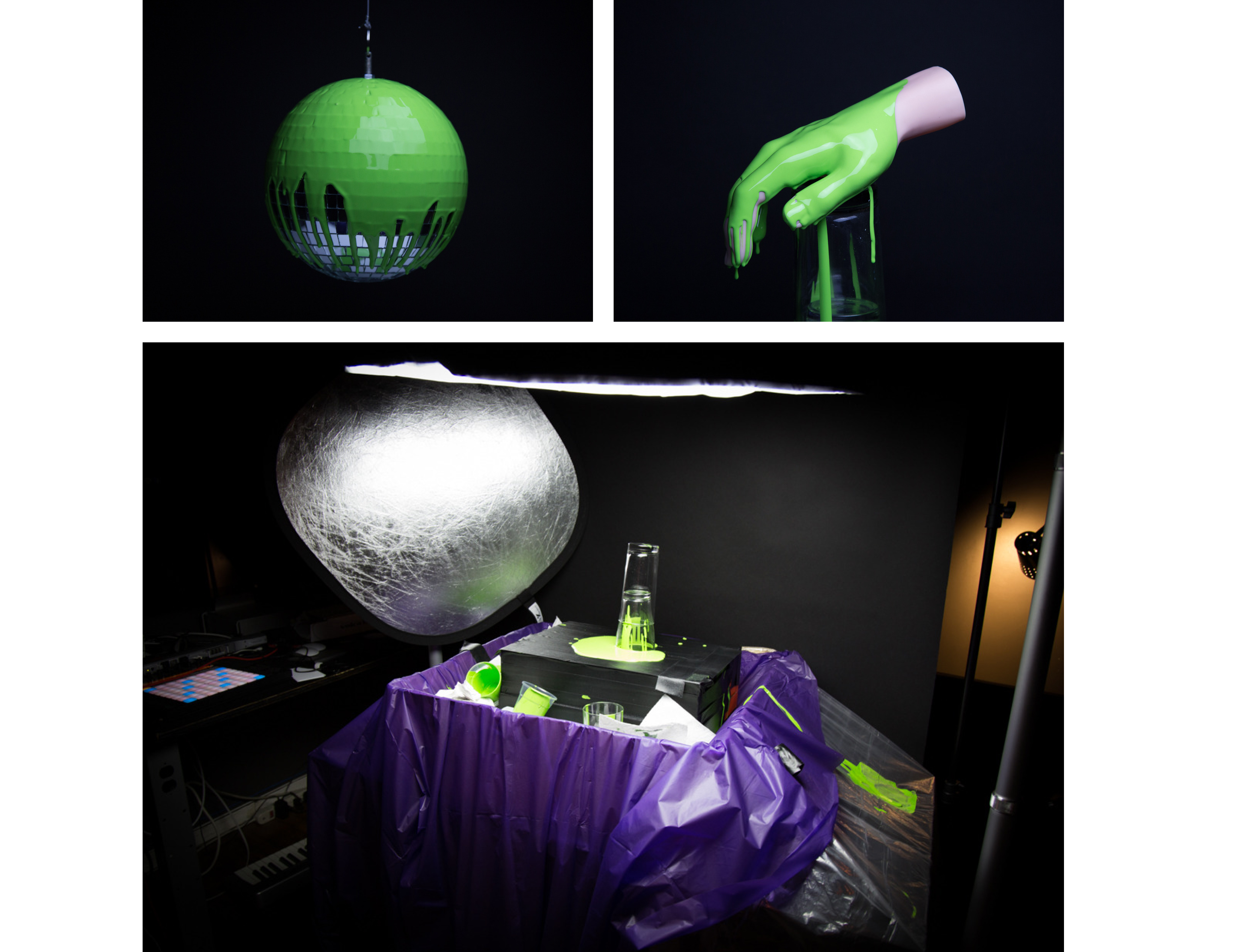 Once we had all of the footage, I gave myself a day to play with effects and manipulate the footage in Final Cut Pro X. We knew that we were going to have to use all of the artists’ logos, so we couldn’t have too much of Jukely’s branding in the videos, so I needed to find clever ways to help people associate this night with Jukely. I decided to make the paint a purple hue, loosely inspired by the evil purple ooze in the Power Rangers movie.

We didn’t have much marketing budget, so we were going to have to rely heavily on word of mouth. We wanted to spread rumors that Justice was playing without explicitly saying it, so we decided to release a video that heavily teased that Justice would be there. I had the idea of slowing down and distorting the end of one of their songs and using it as the music for the teaser trailer.

While we were able to announce three of the four artists, we weren’t allowed to name Gesaffelstein due to the artist’s contracts with other shows, but wanted to imply that another big name would be at the show. In order to do that, we decided to include a censored name to get people’s imaginations running wild of who it could be.

Closer to the event, we released a third and final video announcing that Gesaffelstein was the mystery guest. 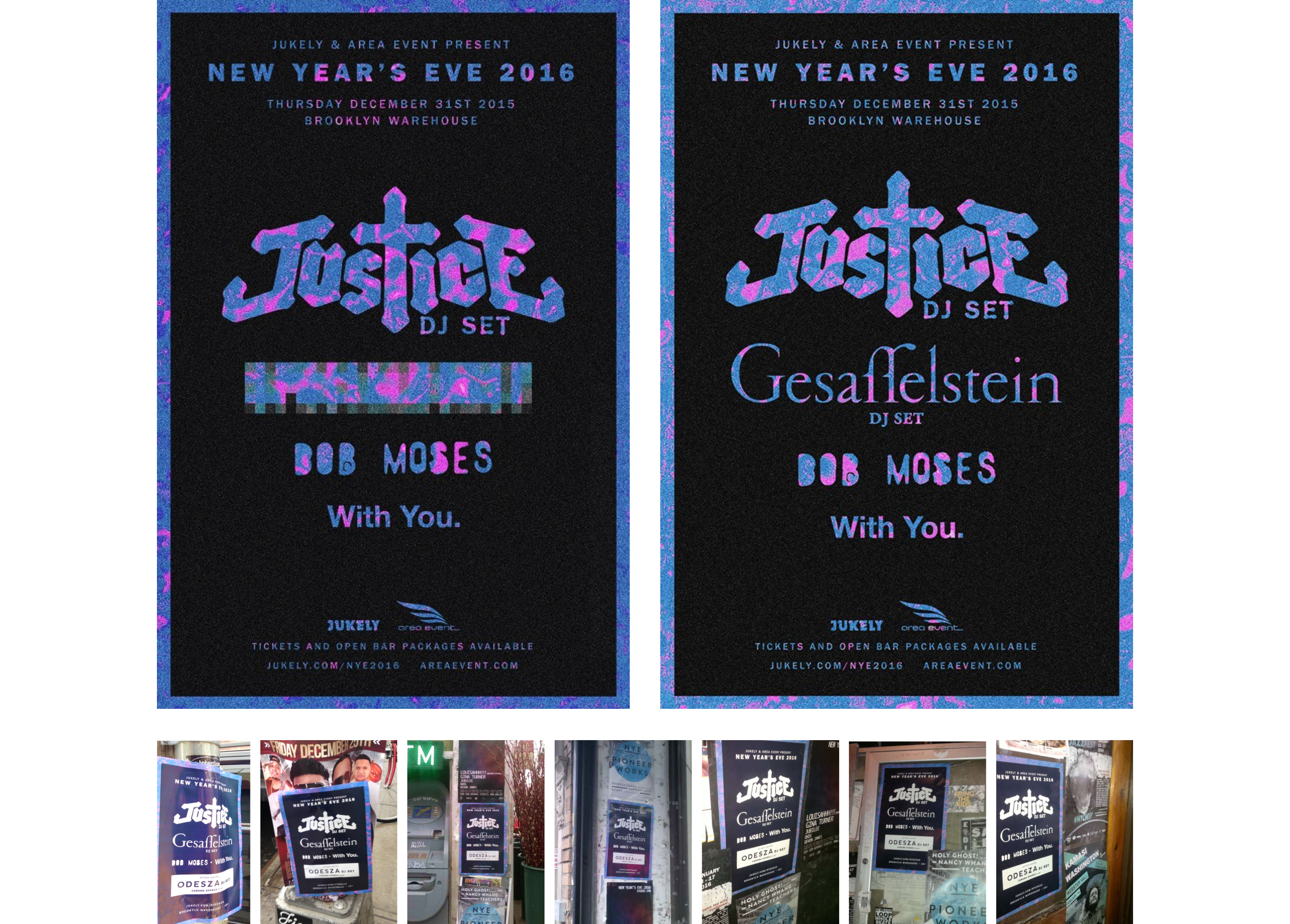 I also designed posters for the event which we plastered all over the city.

Despite not having a large marketing budget, the fact that Gesaffelstein and Justice were doing a show together got a lot of people talking and got a lot of press that helped us sell tickets. The marketing was super helpful with building hype for the show and helped us stand out among the other New Year’s Eve shows in New York. The show itself was extremely successful and brought in a lot of Jukely signups. 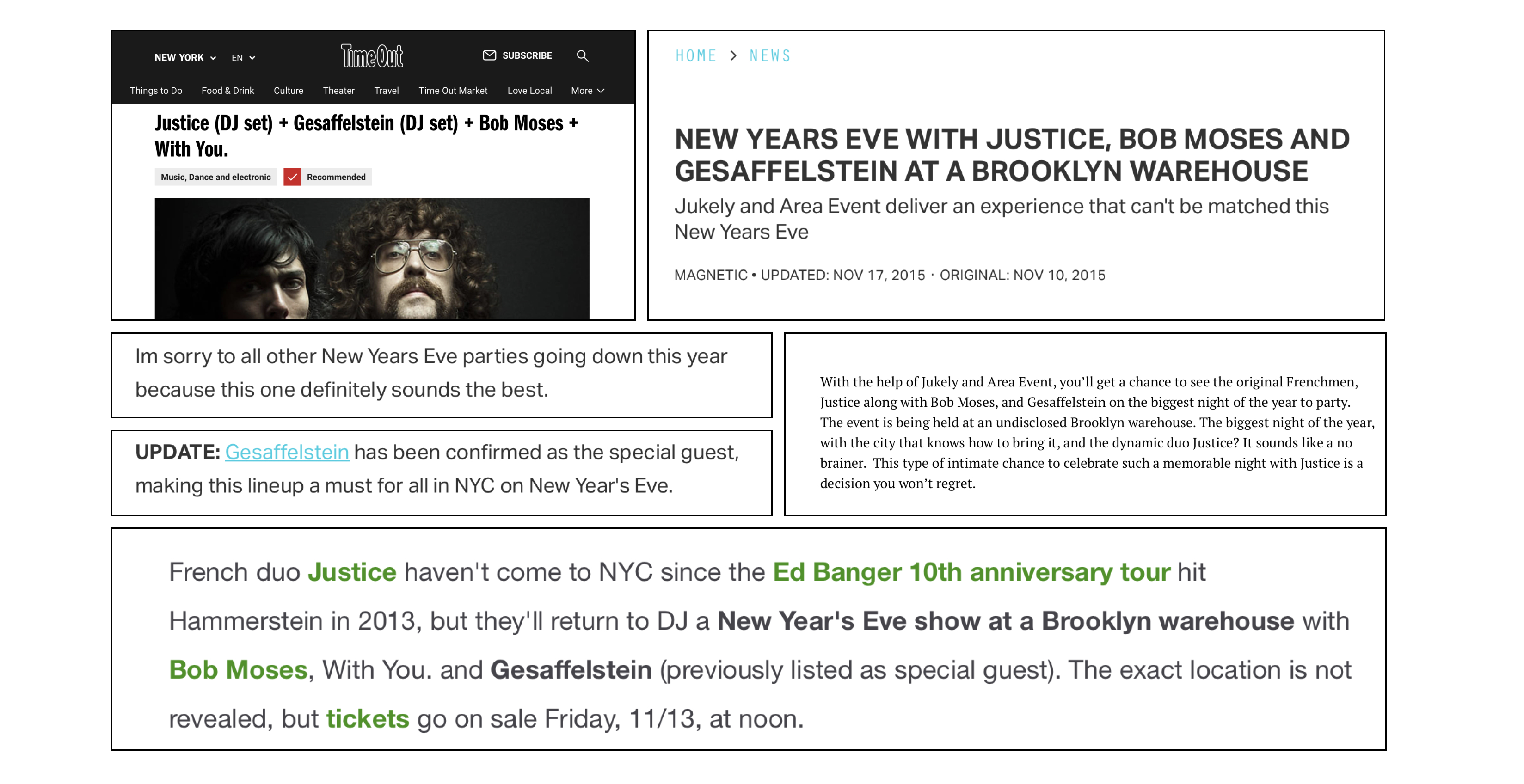 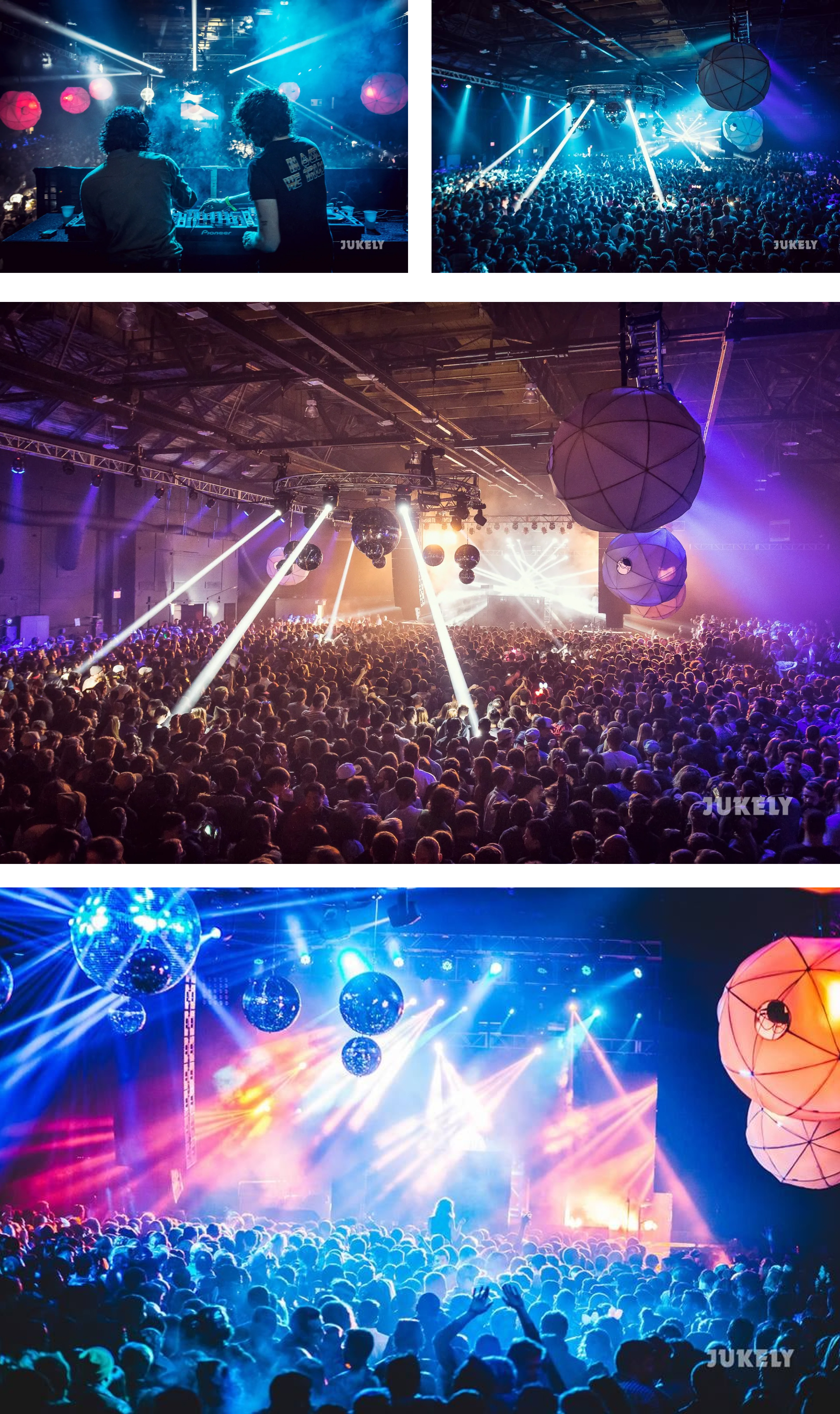